Occupation Wall Street, if nothing else, is about access to public space.
As thousands of demonstrators marched to Times Square to mark the 10 year anniversary of the bombing of Afghanistan, the police shouted through bull horns, “clear the sidewalk for pedestrian traffic,“ to which the demonstrators replied, “We are pedestrian traffic!”
Once in Times Square, the NYPD set up the familiar cages, forcing the crowd into geometric pockets so cars could pass and the crowd could be contained. It hardly mattered that thousands of people were crushed together with no place to move, while double decker tourist buses sailed south, uninhibited, their passengers, waving and snapping pictures.
The surreal aspect was amplified by the fact that the only time masses of people are permitted to crowd into Times Square is on New Years Eve. It’s an event usually avoided by New Yorkers but familiar to all from television footage showing festive and expectant throngs looking skyward, huddled together in the cold, waiting to be entertained, waiting for the ball to drop, waiting in a fundamental way, to be released. But on Oct 15, people were not waiting for anything. There was no signal, no speakers. They weren’t there to receive instructions. They weren’t there to shop. They were simply, and undeniably, there.

To see them with hand made signs, surrounded by huge advertisements of the furry penguin from Happy Feet, or the red Bank of America sign, or the giant Mama Mia poster, was so strange it made Times Square into something all together stunning. At one point, a man climbed on a pole, lit a sparkler, and the crowd sang, “This Little Light of Mine.” There amid the most intense neon per square foot perhaps in the world, someone lights a sparkler and the crowd starts singing.

Curious to see how the NYPD responds in the days ahead to Occupy Wall Street’s use of the intentional crowd in a city fully crowded. I am reminded of

The dramatic showdown between thousands of demonstrators and NYC Mayor Bloomberg was averted at the 11th hour when faced with overwhelming force, the Mayor decided the inhabitants of Zuccotti Park had sufficiently tidied themselves up, at least for the time being, and Occupation Wall Street continues. Feeling their power and wanting to celebrate, hundreds of demonstrators took to the streets and sidewalks of lower Manhattan Friday morning. In the end, the creativity and sheer numbers of the demonstrators was too much for the NYPD. A few scenes from Friday morning. 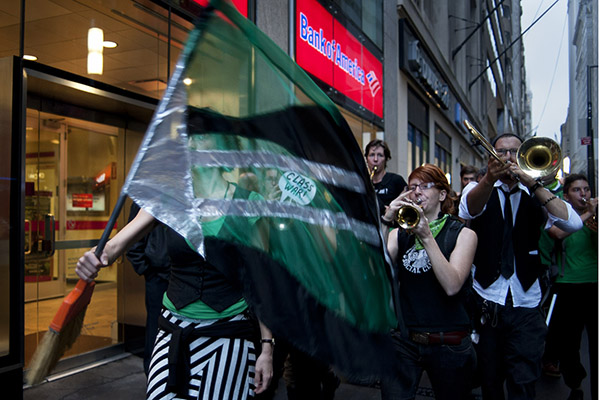 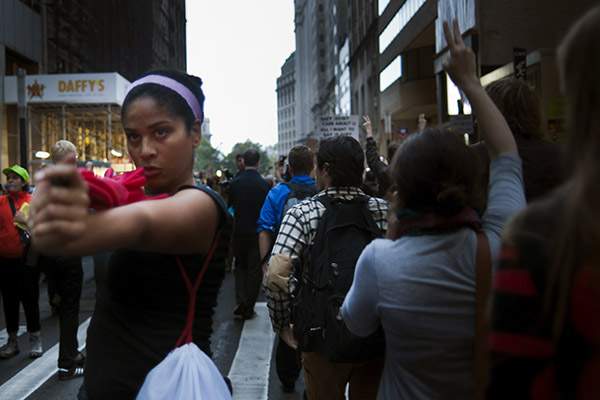 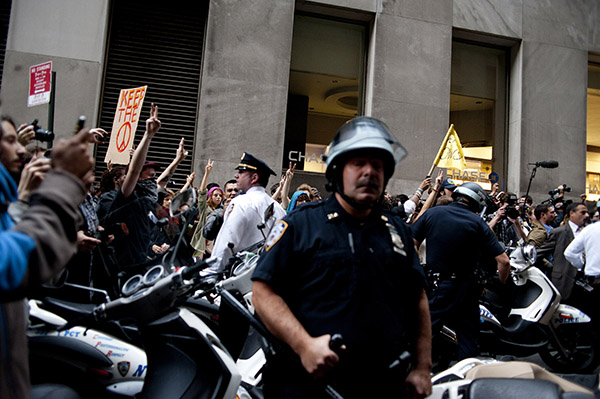 There was at least one grotesque moment of police rage captured here See 1.41 seconds. And I noticed two occasions when plain clothes suit and tie higher ups, with no visible identification or badge number, bolted from the crowd and got physical. 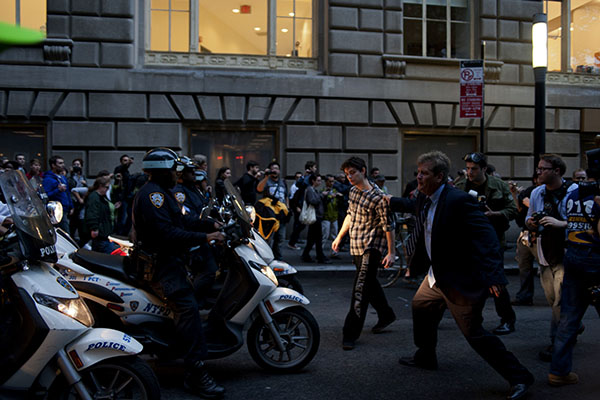 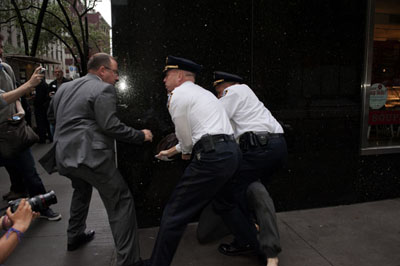 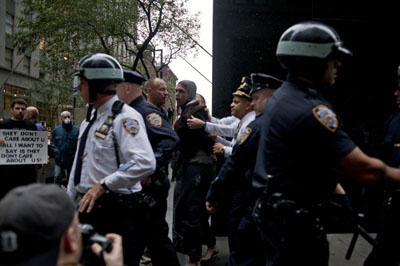 Occupy Wall Street (OWS) is an ongoing demonstration in Lower Manhattan — a bold and audacious act to create meaningful public dialogue about economic inequality and human rights in the USA and beyond. It began September 17 when a group of young people set up camp in a small city park, normally home to construction workers on lunch break from the former World Trade Center construction site. In 21 days it has grown fantastically, and virally, spanning similar movements in the USA and beyond. Their occupation is a symbolic act, yet their demands are quite specific. Entering Zuccotti Park, where they are encamped, is a beautiful experience. People are kind, they are talking as opposed to texting, they are reading, drawing, sharing stories, listening, being human. Food is free. Help is offered. People are taking care of each other. Where in all of this is the enemy? Egyptians had Mubarek, the New York demonstrators have….. Wall Street. As Mayor Bloomberg correctly said (and he should know) Wall Street is no longer on Wall Street. The money makers and masters of the universe are spread out, holed up in their trading bunkers and investment banks all over town. Wall Street is more of a theme park now, a place for tourists to snap pictures of the gated NYSE, or a community of high priced condos where people see the demonstrators as a public nuisance. See NY Times story. here My own visual prejudices have been challenged photographing OWS. I am used to seeing the man in the suit as a symbol of the elite class, and then I saw men in suits marching with the demonstrators. I am used to thinking that when people take off their clothes and shout greed is bad, to not take them too seriously, and then Michael Shaw at Bagnewsnotes opened my eyes to my own picture. Personally, it’s been inspiring to see this energy and creativity, especially in New York, which hasn’t felt this free in decades. Here are a few images from some evening visits. For a complete set, visit NOOR . All photos ©Nina Berman 2011, All Rights Reserved 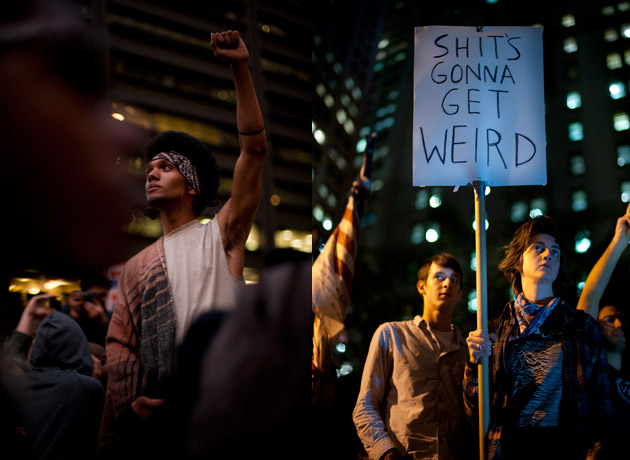 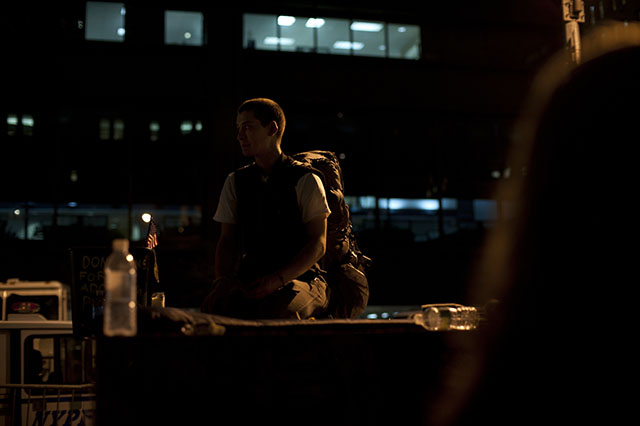 Goksin Sipahioglu , a photojournalist, and the founder of the Paris based Sipa Press, died this week, at age 84.

He was a legend , one of the few western journalists in Cuba during the Missile Crisis. His photo of a young Cuban woman in a skirt and high heels standing with a gun is a knock-out . He gave me, and thousands of other photographers their start, like the great, Maggie Steber, Alexandra Boulat, Luc Delahaye, Olivier Jobard, Reza, Abbas, and Alfred. Brilliant photo editors and managers worked there such as: Sue Brisk, Jim Colton, and Ayperi Karabuda Ecer. For me, in the 1980 and 1990’s it was wild place, full of drama and dysfunction, but also great excitement and promise. Goksin was the king of it all. A tall, elegant, striking man with huge hands, who loved photos and loved women even more. He once asked if a superstar photographer who he adored and had left him, (they always did) would return if he bought her a Mercedes. That was Goksin. A figure from another time. He will be deeply missed. Condolences to all who knew him. Below, a photo from the first story I ever shot for them. Baby Raymond. 1987. Born at 16 pounds. They sold it like mad.