Please join me for the opening of the exhibition “Bronx Gardens”  at the fantastic Bronx Documentary Center,   from 4 – 7 pm,  June 2, 2012.

Forty-five members of a U.S. veteran anti-war group threw off their service medals in a gesture of defiance against US military policy and the wars in Iraq and Afghanistan during a demonstration at the NATO Summit in Chicago, Sunday May 21, 2012.

It was the first public mass protest of this kind since 1971 when hundreds of Vietnam vets threw their medals at Capitol Hill in Washington D.C to denounce the Vietnam War.

“I’m giving back my medals for the children of Iraq and Afghanistan. May they be able to forgive us for what we’ve done to them,“ said Army veteran Steve Acheson, before hurling his two medals towards the barricaded NATO summit headquarters.

The veterans were supported on stage by female members of Afghans for Peace and military mother Mary Kirkland, who held a photograph of her son Derek who was found hanging in his barracks, having committed suicide following tours in Iraq and Afghanistan.

For video of the event, watch here:  http://www.youtube.com/watch?v=0ctEQqlf2xw 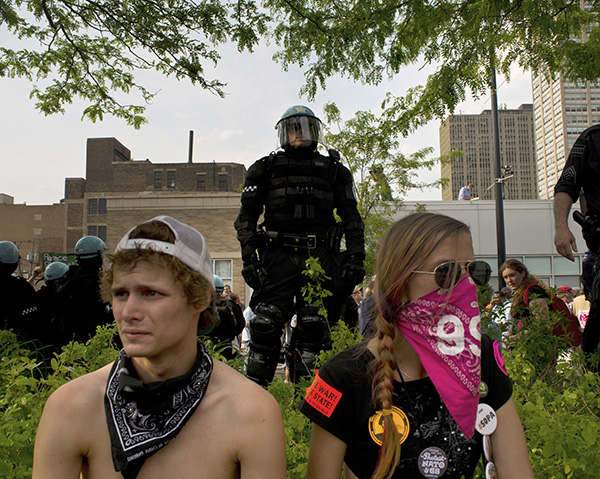 Chicago, Nato summit, the city enforces a several mile exclusion zone, leaving protestors with no target but the police. They chase each other in circles, a kind of urban sport. Frustration builds as those on the street can’t help but realize that their chants will fall on deaf ears. Trained for restraint, yet dressed to kill, the police are simultaneously frightening and absurd. With so much at stake — will the world’s wealth continue to be used for war and destruction — and so little hope for change, the events are more like rituals, with each side dressing for the occasion. 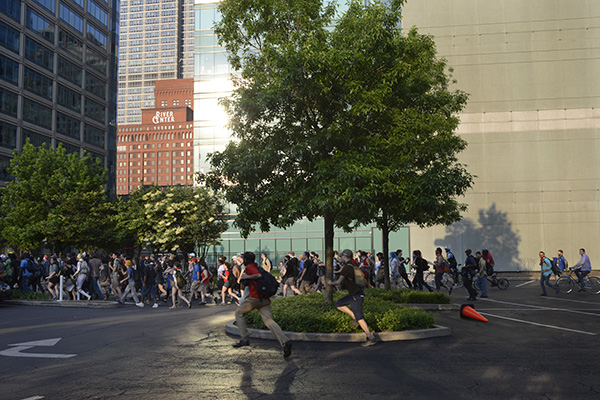 For an all together different edit, visit my work from Chicago on BagNewsNotes where Michael Shaw provides the visual commentary.

At a rate of every minute every day, the New York Police Department stops a person, questions them, asks for identification, and frisks them, sometimes at gunpoint, sometimes slapped against a wall. The number one reason for the stop, according to NYPD statistics, is that the person made a “furtive” look. The number two reason is “other.” Most of the time that person is black or Latino and most of the time they are living in the city’s poorest communities. A very small percentage of these “stop and frisks” result in arrest or the seizure of any kind of contraband. Since 2002, the number of stop and frisks has increased from 149, 000 to approaching 700,000 this year. The NYPD claims that “stop and frisk” is an effective policing strategy but its own statistics paint a different picture. 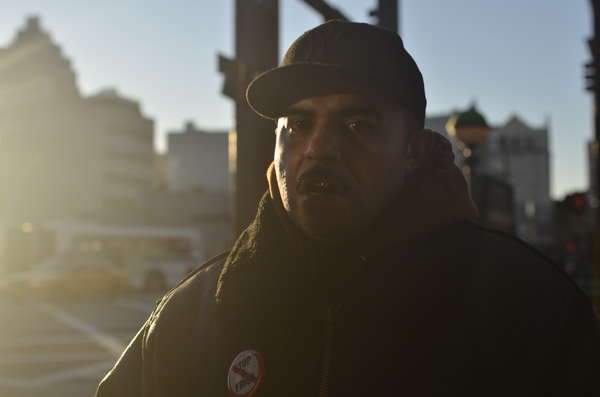 A dedicated group of activists, along with author and professor Cornel West , stood in front of a police precinct in Harlem last October and got arrested in protest against Stop and Frisk. They are now on trial and face up to 15 days in prison if convicted. I got to know many of these activists over the past few months and photographed them as they try to put an end to police violence and intimidation. When police gunned down an unarmed teenager , Ramarley Graham, from the Bronx, wanted for no crime, these activists were there, at the wake, at vigils in front of the 46th Bronx police precinct. They have handed out thousands of buttons and distributed literature. They patrol neighborhoods to watch and video tape police activities. They are some of the most dedicated people I have met. Here are a few images.